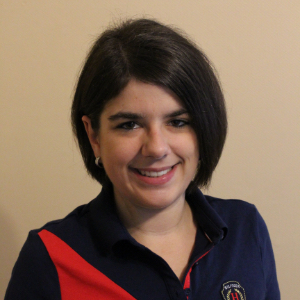 PhD graduate. During my time in the StatNLP group, I explored RL techniques to learn from feedback on the tasks machine translation and semantic parsing for question-answering.

MLE is often not enough to train sequence-to-sequence neural networks in NLP. Instead we employ an external metric, which is a reward function that can help us judge model outputs. The parameters of the network are then updated on the basis of the model outputs and corresponding rewards.

For this update, it is necessary to obtain a derivative.

But how can we do this, if the external function is unknown or cannot be derived? 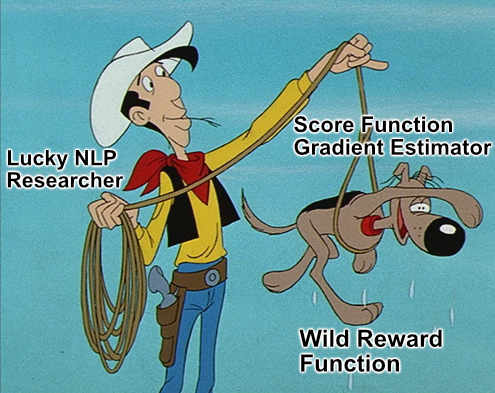 Why MLE is not Enough

Traditionally, neural networks are trained using Maximum Likelihood Estimation (MLE): given an input sequence and a corresponding gold target sequence , we want to increase the probability that the current model with parameters assigns for the pair . This gives the following loss function:

The parameters of are then updated using stochastic gradient descent,

But there are various issues with using MLE that has led researchers to explore alternative objectives. Let’s looks at them next.

1. Gold targets are not Available

This is most prominently the case in many domains of semantic parsing for question-answering, where questions are mapped to a semantic parse , which can be executed to obtain an answer . For many domains, it is easier to collect question-answer pairs, rather than question-parse pairs (e.g. see Berant et al. 2013). But with no gold parses available, MLE cannot be applied.

What can we do instead?

The current model produces a set of likely parses (e.g. by sampling from the model distribution or by employing beam search). Each parse is then executed to obtain an answer. Next, we compare the answer to the gold answer to get a reward . Generally, we have if there is no overlap between answer and gold answer and if they match exactly. With this, we can update the model’s parameters.

During traditional MLE training the model is fed the perfect tokens from the available gold target , but at test time the output sequence is produced on the basis of the model distribution. This causes a distribution mismatch and inferior performance.

How can we reduce this mismatch?

Instead, we can feed model output sequences already at training time. Typically, once an entire output sequence has been produced, this sequence is judged by an external metric and the resulting reward can be used as feedback to update the model’s parameters.

How can we do that?

Similar to problem (2.), we can feed model output sequences at training time. In this case the external metric is the final evaluation metric. For example, in the case of machine translation, typically a per-sentence approximation of the BLEU score is used.

In praxis, this expectation has to be approximated. For example, using Monte-Carlo sampling leads to the REINFORCE algorithm (Williams 1992): we sample one output from the model distribution (see also Chapter 13 of Sutton & Barto 2018). Approximating the expectation over , the actual training objective becomes:

Alternatively, we can use Minimum Risk Training (MRT) (Smith & Eisner ‘06, Shen et al. 2016). Here, several outputs are sampled from the model distribution. This stabilises learning, but requires that more outputs are evaluated to get corresponding rewards. Assuming sampled outputs, the objective then takes the following form:

Due to sampling, both approaches can suffer from high variance, which can be combatted using control variates (see for example Chapter 9 of Ross 2013).

The Problem: The Reward Function cannot be Derived

To minimize with stochastic gradient descent, it is necessary to calculate , also called the policy gradient in Reinforcement Learning (RL) terms.

But in praxis, the rewards are typically either from an unknown function (e.g. if rewards are collected from human users) or the underlying function cannot be derived (e.g. in the case of BLEU).

As such, it is not immediately clear how to derive , i.e. how to calculate

To be able to calculate , we use two tricks:

The derivative of the logarithm is:

Now we can formulate what is known as the score function gradient estimator (Fu ‘06):

Let’s investigate for each line what happened:

We no longer need to know what the function that produces looks like or derive it.

For an alternative view on the subject, also see this great blog post.

When can it be applied?

The score function gradient estimator can be applied independent of the underlying model, as long as it has a derivative.

E.g. if is a log-linear model with feature vectors ,

then the derivative would be

In the case of neural networks, backpropogation is applied to derive (see for example Chapter 3 of Cho 2015).

Acknowledgment: Thanks to Julia Kreutzer for her valuable and much needed feedback for improving this post.

Disclaimer: This blogpost reflects solely the opinion of the author, not any of her affiliated organizations and makes no claim or warranties as to completeness, accuracy and up-to-dateness.

Comments, ideas and critical views are very welcome. We appreciate your feedback! If you want to cite this blogpost, use this bibfile.